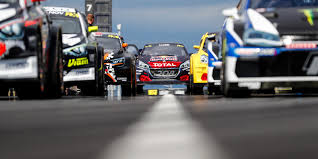 When you think of fast cars on race tracks, the chances are that the design of an F1 pops into your head. But do you know what accelerates faster than an F1? Visit the FIA World Rallycross Championship on the first weekend of April this year and enjoy the revving of the engines and blinding speeds of the RX Supercars. Having debuted in 2014, the FIA World Rallycross Championship includes events throughout the year. Race enthusiasts can enjoy the off-track entertainment in the Yas Marina circuit for the first time. For the first time in the Middle East, the 11-round thrilling championship race series is set to blow off your mind.

Both circuit and rallying are involved in Rallycross, with the action taking place on mixed tracks, allowing fans to gulp down the Fast-And-Furious action before their eyes. The cars are shaped like high-performance hatchbacks, with 600 bhp of power in a manual drive. The turbo-charged acceleration of 0-100 kph in 2 seconds will reverberate through the race circuits. Three or six cars line up next to each other and take racing to its farthest limits. Four to six laps see some of the most exciting action taking place on part-dirt and part-asphalt tracks.

The experience for fans in Abu Dhabi

Yas Marina circuit welcomes the greatest and fastest rally drivers from all around the world for the opening ceremony of FIA World Rallycross Championship of the year. The championship will be hosting the night race for the first time. Excitement, drama and adrenaline will be high on the 5th and 6th of April in the Yas Marina circuit as the cars tackle the custom-built track under the floodlights. The International Championship further boosts the credentials of its saying – the ‘Meeting Place of Champions’. The weekends will be filled with exciting and thrilling races to the end.

On-track, off-track and even after-race events will be included in the tickets that have already gone on sale. If you want to enjoy the qualification and practice sessions, you need to be at the Yas Marina circuit on these days. The final day should be very exciting, and there would be supporting races as well. It will be an exciting experience for the fans. The all-access public pitlane walk and the specially created Rallycross experiences will excite die-hard fans. The popular X-Parks Pass can be a good option for families on the Yas Island, which will offer unlimited access to the Ferrari World Abu Dhabi, Warner Bros World Abu Dhabi and Yas Water World Abu Dhabi from Thursday to Sunday.

The events in the World Rallycross

Most of the RX events take place in two days. Four qualifying rounds are held, where 3 to 5 cars participate. The drivers who enjoy the fastest overall times over four laps qualify for the semi-finals. Generally, two semi-finals are held. Six cars race over six laps. The three at the top qualify for the final of 6 laps. The final also allows the participation of 6 racers. However, to make things more exciting and adventurous, drivers must take care of the Joker lap. It includes an additional section of track that all of the drivers need to cover, at least once, during each race. Otherwise, they will be awarded a penalty of 30 seconds.

Adrenaline will be high during the races

The FIA World Rallycross Championships are one of the most exciting racing championships. Enjoy the most exclusive racing games at the Yas Marinas circuit on the 5th and 6th of April. The tickets vary from AED 395 to AED 1495. The North Grandstand general admission costs AED 395, the North Club lounge costs AED 595, and the Yas Central Hospitality can be bought for AED 1495. The FIA World Rallycross Championship is being held here for the first time. It is going to be another fun-filled and dynamic year at the Yas Marinas.

Motorsport events will be held throughout the year with endurance races, single-seater championships or the street-style drag events. The season will be ending with the Formula 1 Etihad Airways Abu Dhabi Grand Prix.

The centre for fuming races

The Yas Marina Circuit will be all about revving engines on the exciting weekend of 5th and 6th April. It will be transformed into a festival of off-track and on-track nail-biting racing events. If you are a racing enthusiast, book your tickets in advance and cheer your favourite racer. It will also host a hub of family activities. Food and beverage, driver meet-and-greets, go-kart challenges and live music by the local musicians will keep you entertained. The ticket holders can also witness a Friday after-race concert.

Be ready for the high octane, RX Championship at the custom-built racing track at the Yas Marinas. Get your tickets and be present to experience the grand inaugural of the season’s FIA World Rallycross Championship.

When you think of fast cars on race tracks, the chances are that the design of an F1 pops into your head.