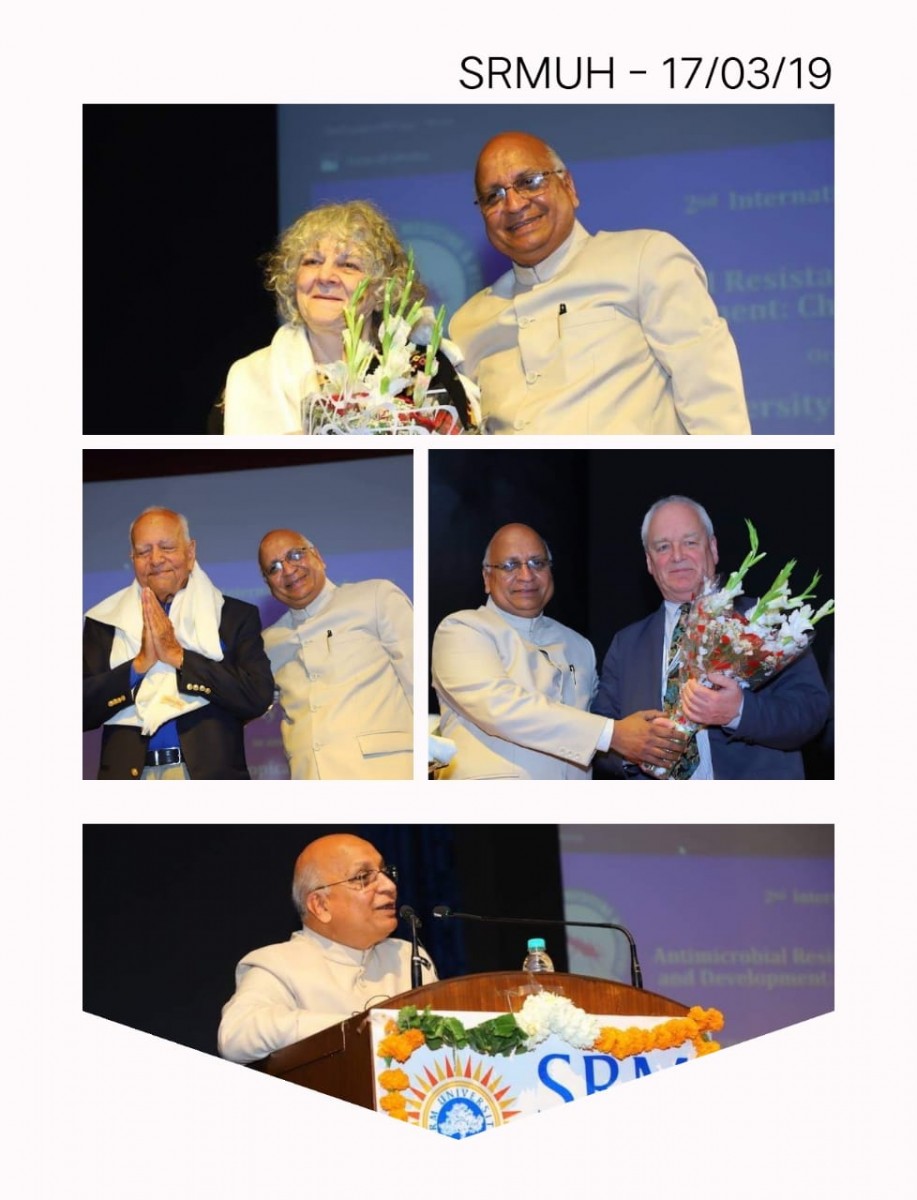 Delhi-NCR March 20,2019 ( PR Submission Site ) SRM University, Sonepat, in association with the Royal Society of Tropical Medicine and Hygiene (RSTMH), UK organized a three-day International Conference on  “Antimicrobial Resistance, Novel Drug Discovery and Development: Challenges and Opportunities” at IIT Delhi, Sonepat Campus on March 17-19, 2019. The conference aimed to provide a common platform to research communities, policy makers, students, and pharmaceutical industries to exchange experiences and challenges related to the development and discovery of reliable and effective AMR drugs and vaccines.

Prof. Ada Yonath, Nobel Laureate in Chemistry (2009) inaugurated the conference and highlighted the problem of the upsurge of antibiotic resistance and emphasized the need of research institutions along with pharmaceutical companies to take an active initiative to combat this global issue. The conference witnessed a galaxy of eminent scientists, scholars, and intellectuals from all around the globe gathered under one roof to discuss the scope and find solutions to the existing problems of AMR.

Dr. P Prakash, Vice Chancellor, SRM University, Delhi-NCR, in his inaugural address, welcomed the dignitaries and the participants, and felicitated the guests, and pointed out that the conference was a landmark in the history of the SRM University where eminent scientists have gathered to discuss and find solutions regarding the menace of AMR. Prof. V. Samuel Raj, Dean-Academic Affairs, SRM University and the organizing secretary of this international conference insisted on the need of scientists to collaborate to seek a solution and enhance surveillance of pathogens non-responsive to antibiotics. Furthermore, he added that the problem of AMR pathogens is not a future menace but it has already penetrated our environment.

Dr. Soumya Swaminathan, Deputy Director General, WHO, in her recorded video message expressed that the World Health Organization has been initiating strenuous efforts for a compatible solution for antibiotic resistance and other related issues. Padma Bhushan, Legion of Honour Prof. G.P. Talwar, who was the guest of honour suggested that it is not just the AMR drugs that one should concentrate on, but the scientific society should also work on the development of vaccines.

Prof. Simon Croft, eminent scientist, London School of Hygiene and Tropical Medicine (LSHTM), UK reiterated the need for development of novel drugs and new treatments. The conference had invited talks, panel discussions, poster presentations, scientific stalls and so on that immensely contributed for an array of network among the scientists, academicians, pharma agencies and institutions.

The three-day conference concluded with a valedictory function, where Dr. P. Prakash, Vice Chancellor, delivered his presidential address; whereas, Dr. Manish Bhalla, Registrar,  welcomed the gathering. The Chief Guest, Sir Tom Blundell, a doyen in the pharmaceutical research and industry at University of Cambridge, articulated on the sequences of genomes of humans and pathogens has the potential to accelerate diagnosis, prognosis and cure of disease, so, structure-guided fragment-based screening techniques have proved effective to new ideas about repurposing and redesigning drugs. Dr. Francois Franceschi, WHO, who was the Guest of Honour, felicitated and eulogized the organizers. Prof. Samuel Raj, thanked the audience for their commitment in participating in the conference for making into great success.