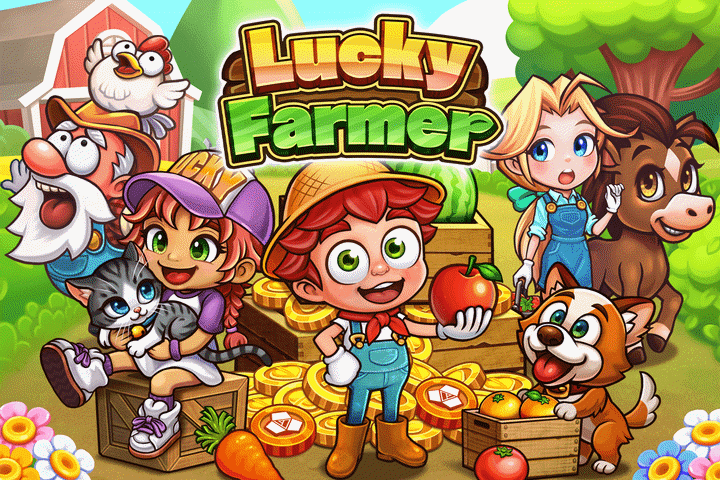 Singapore — Web3 entertainment company Digital Entertainment Asset (DEA) has announced the launch of Lucky Farmer, a new NFT game on the PlayMining gaming platform. Lucky Farmer joins a rapidly growing catalog of PlayMining Play-and-Earn (P&E) games that enable players to earn DEAPcoin ($DEP) tokens, which can be used to purchase NFTs from the PlayMining NFT marketplace or traded on popular crypto exchanges such as OKX, Gate.io, Uniswap, Bitmart and more.1

“We are sure that Lucky Farmer will be a hit with players,” said DEA co-founder and co-CEO Naohito Yoshida. “Lucky Farmer and in fact all of the games on the PlayMining GameFi platform are easy to play and great for casual players looking to enjoy some quick entertainment during their busy day. The best part is – you get to earn $DEP tokens through play!”

How To Play Lucky Farmer

Lucky Farmer is a farm-themed casual coin pusher game where players attempt to collect large numbers of medals through an in-game slot machine. These medals can then be exchanged for various items or used to advance pets in the game or participate in weekly ranking competitions. Incidentally, these medals can also be traded for DEP tokens.

Lucky Farmer is full of incentivized play which makes it both fun and rewarding for players. Players spin a slot machine to score certain combos to generate raining medals, crop growing or egg dropping. ‘Fever Time’ is triggered when the triple seven jackpot is hit, causing medals to rain down in torrents. Aligning pet patterns in the slot machine activates a pet’s skills, which can trigger dropping crops or eggs on the field. In addition, feeding a pet will make it friendly and increase the activation rate of its skills. More eggs get a player more numbers which are used to play Bingo and ‘JACKPOT CHANCE’ to win even more medals.

The game uses two kinds of NFTs to enhance gameplay – Farmland and Character NFTs. Farmland NFTs give the players access to special crops, increase the odds of winning slot combos and also give players the chance to win DEP tokens directly during ‘Fever Time’ and ‘JACKPOT CHANCE’. Character NFTs allow the player to customize the play experiences, such as being able to change their avatar, game background and music. When the specific characters and farmland NFTs are paired together, it also increases the probability of scoring winning combos.

Players can use DEP tokens to purchase the NFTs on the PlayMining NFT marketplace, or from an in-game ‘Lucky Box’ where they can either receive a random NFT or an in-game item.

In addition to Lucky Farmer, PlayMining features a number of other P&E NFT game titles, including Job Tribes, Cookin’ Burger, Menya Dragon Ramen and Graffiti Racer. As mentioned, NFTs purchased from the PlayMining NFT marketplace can be used in the games. The NFT market also sells premium artwork NFTs from some of the hottest creators in the Japanese video game and anime industries. Metaverse projects are also in development for the platform.

Notably, DEAPcoin was the first P2E token to be officially approved by Japan’s Financial Service Agency. In an effort to promote NFT gaming in Japan, DEA recently embarked on a business alliance with TV Tokyo to create educational television content about Web3 technology for the mainstream Japanese audience. DEA has also signed a separate MOU for a collaborative Web3 partnership with Rakuten Group, another major player in the Japanese Web3 space.

PlayMining develops many of its own games in-house, but also partners with third-party game studios to develop games for the platform. This is a major boon for independent developers, giving them access to intellectual property (IP) monetization opportunities on PlayMining’s NFT marketplace and the upcoming PlayMining Verse, a metaverse initiative. Small game studios usually lose a lot of value to distribution channels — the most popular game distribution platforms such as Apple, Playstation and Nintendo notoriously take around a 30 percent cut of every sale — but PlayMining offers third-party studios much fairer fees and a Web3 platform that keeps everything transparently recorded on the blockchain. The PlayMining NFT marketplace also pays out royalties to both official IP owners and fan artists and has paid out over SG$9 million in royalties to date.

“We’re releasing multiple new game titles for PlayMining every single year, rapidly building our platform to satisfy our 2.6 million users,” said DEA’s other co-founder and co-CEO, Kozo Yamada. “Our goal is to bring more and more third-party studios on board and build out a game library that rivals Nintendo. Play-and-Earn gaming is the new wave of the future, and DEA is proud to be at the forefront of this innovative movement that rewards players for participation.”