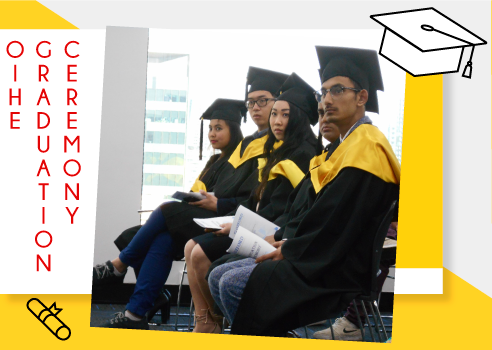 February 27,2019 ( PR Submission Site ) On the 24th of January 2019, Ozford Institute of Higher Education (OIHE) celebrated its second graduation event on campus. Attendees at the ceremony included the graduates, their family and friends, academic and professional staff from the Institute, distinguished guests and respected members of the Governing and Academic Boards.Mr Tim Smith was the Master of Ceremony (MC) for the occasion.

The ceremony started with the official opening address by the Chair of the Governing Board, Emeritus Professor John Rickard. Professor Rickard congratulated the students on completing their degrees. He thanked the President Mr. Yan Qiu and Vice-President Ms. Rong Liu for embarking on a noble pursuit of establishing an educational institution in Melbourne. He expressed his very special thanks to all the families and friends of the graduating students for their help and support throughout their study.

He said in his speech,  “We are here today to celebrate a significant achievement of our graduates. The students graduating today are very special as this is only our second graduation ceremony Professor Rickard also added,  “I hope later, the Ozford Institute of Higher Education will become as highly regarding as much as a very well-known UK University, albeit with a rather similar name Oxford University.  You cannot possibly compare between the two, but a long time ago they would have had the same number of graduating students for the first or second round of their Graduations.  Indeed, all the well-known universities like Cambridge, University of Melbourne or Monash, early on, there were a handful of students graduating, and the ceremony not very different to this one that  we are having today.”

The Chair of the OIHE Academic Board, Emeritus Professor Greg O’Brien was the keynote speaker at the ceremony and delivered the Occasional Address, congratulating the graduates on this important milestone. He did provide an interesting intellectual interpretation in explaining the strengths hidden behind the letters O-I-H & E in the acronym of the institute.

Professor Greg O’Brien’s speech was followed by the actual presentation of awards and certificates to graduating students. This part of the ceremony was facilitated by the Academic Dean Professor Sheikh Rahman. Professor Rahman in his short speech reminded the graduating students that they were among the very privileged top 7% of the world population who has obtained a Bachelor degree.

This privilege, in turn, places a lot of responsibility upon their shoulder to support the remaining 93% who were not so fortunate. He also reinforced Professor Rickard’s view with the fact that Oxford University in England had indeed started in a cathedral in the English city of Oxford in the early 13th century with only 7 students. He also assured the graduates of all possible support in the pursuit of their future.

During the presentation of awards, Graduates have been introduced by the Academic Dean, Professor Sheikh Rahman, and Professor Rickard presented the graduates their degrees. Dressed in academic gowns, graduates walked to the stage elegantly and received their degrees from the Chair of the Governing Board. This was a moment they had all been waiting for. These precious moments of each graduate were captured by the official photographers.

Academic Excellence Award was presented by the Academic Dean, Professor Sheikh Rahman to the nominated graduate, Ms Shuang (Sunny) Chen for her outstanding academic achievement and student leadership contribution to the Ozford community. Ms Chen mentioned in her speech that strong determination, persistence and hard work were behind her success in achieving the dream.

The Chairman of the institute Mr Yan Qiu congratulated all graduating students and their families and thanked all the board members, academic staff and professional staff for their dedication and support in successfully arranging the graduation ceremony.

MC, Mr Tim Smith thanked everyone and announced the conclusion of the Graduation Ceremony.

The Institute proudly congratulates the graduates on their academic achievement and wish all our graduate’s tremendous success in their future endeavours!

Read more about Ozford Institute of Higher Education, visit our website at  http://www.ozford.edu.au/higher-education/.

On the 24th of January 2019, Ozford Institute of Higher Education (OIHE) celebrated its second graduation event on campus.