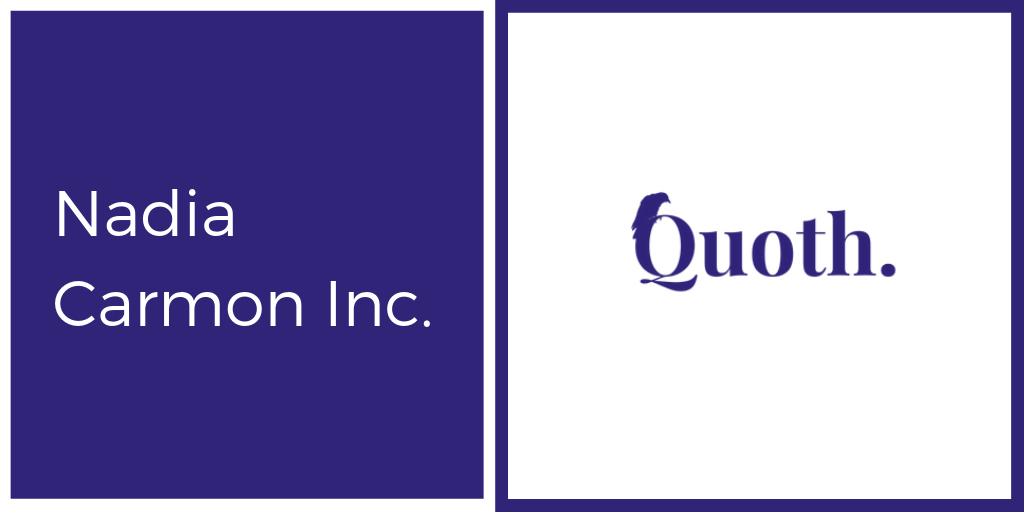 This move is in an effort to maintain the integrity of her personal brands – Nadia Carmon Inc, which she owns and operates to consult startups on branding and marketing strategies customized to their niche, as well as develop long-form content, social copy and press materials to promote brand awareness, and Quoth – a storytelling for the Arts blog in which she collaborates with film, music and similar professionals on content about their work.

She is currently in the proposal stage for 2 projects in the non-profit and performing arts spaces.

Nadia Carmon is a marketing professional whose 8+ years of experience in writing and expertise in client building has been instrumental in the development of several independent ventures. Since 2008, she has been a Contributing Writer in the Arts and Entertainment genre for seven publications; a growing list that most recently includes the alternative luxury magazines Prysm (Now Fantôme) and DeVour. In addition to writing about film and music for Prysm Magazine, she also functioned as their public relations rep; networking with media outlets to pitch and coordinate on features about the magazine as well as writing press releases to expose the general public to the startup.

As a screenwriter, two of her shorts have been produced, including the 2014 experimental film Stranger, starring Lydia Darly (Exorcist: The Beginning, The Way You Love) and directed by Jeremiah Kipp (Atlas of the Soul, The Minions, The Days God Slept). In 2014, Stranger was an Official Selection of the Roxbury International Film Festival and the Beyond the Beaten Path Film Fest/SoCal Independent Film (Now the Huntington Beach Film Festival).

As a Content Writing Intern with the Digital Branding Institute, she contributed articles on how to build and manage your digital brand and reputation. Her most popular article to date, “How To Use Small Business Hashtags To Promote Your Brand”, was shared 554 times. Her self-published “Low Budget, High Art: An Interview with Indie Filmmaker Jeremiah Kipp” was shared 189 times.

Most recently, she was a Marketing Consultant for a Brooklyn-based gaming company for whom she designed a series of interactive campaigns, and conducted marketing research on influential people and organizations in this space.