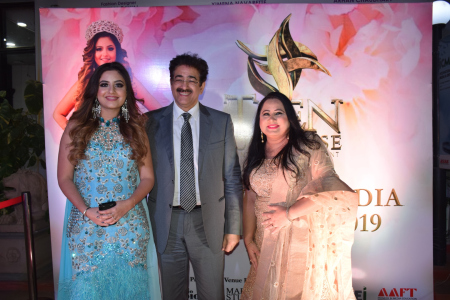 New Delhi, December 25, 2018 ( PR Submission Site ): In a spectacular show, ten beautiful teens enthralled the audience as they competed for the most coveted title ‘Miss Teen Universe India 2019’ at Marwah Studios, Noida Film City. In a contest that lasted three-hours, this year’s Miss Teen Universe India pageant had it all – from being beautiful to have an exceptional blend of mind – and the crown went to Miss Apurva Thakur.

“It is a great pleasure to see young Indian girls representing India on such a prestigious platform. We are no less than any other country when it comes to competition in fashion, design and modeling. Indian girls have proved that beauty and brains go together,” said renowned media personality Sandeep Marwah the President of Marwah Studios as chief Guest while inaugurating the show.

Apurva hails from Mumbai and is currently pursuing Bachelor of Architecture from Thomas Jefferson University, Philadelphia. 19-year-old Apurva has now advanced to the next level of the competition and will be representing India in Panama for the most sought-after title of Miss Teen Universe 2019.  “I can’t explain in words how happy and proud I feel at the moment. Winning this pageant will be one of my biggest achievement in life. I thank the jury for choosing me for the big stage. I am very excited about representing India at the global stage,” said an elated Apurva.

The runners-up include Palak Kohli and Chavi Mehal from Delhi. 19-year-old Palak emerged as the first runner-up.  The experience from this stage will definitely help me get better in future,” said Palak.  “First of all, I would like to congratulate Apurva for winning tonight.,” said Chavi, second runner up Miss Teen India, 2019, I also want to thank National Director of Teen Universe Jasmeet Kaur  for this whole show and Shristi Kaur (Teen Universe for 2017)