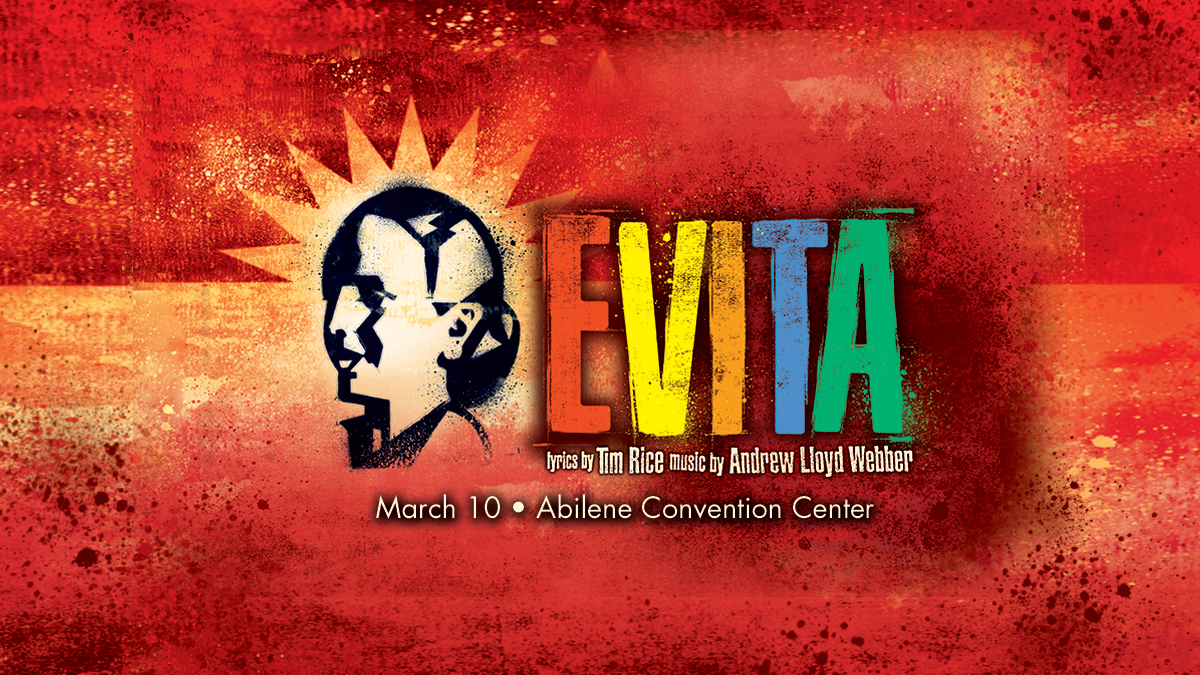 February 26,2019 ( PR Submission Site ) Tim Rice and Andrew Lloyd Webber’s blockbuster hit musical EVITA celebrates the 40th anniversary of its 1979 Broadway debut, live on stage at the Abilene Convention Center Auditorium on Sunday, March 10th at 7:00pm for one show only. Staged by Andy Ferrara with musical direction by Lloyd Cooper, the tour brings together talent from around the country to perform one of the best-known musicals in history. Tickets are on sale now. To purchase tickets, visit CelebrityAttractions.com, call 800.869.1451 or visit the Abilene Convention Center Box Office. EVITA is welcomed in Abilene by Perry Hunter Hall Insurance and presented by Celebrity Attractions and the Abilene Cultural Affairs Council.

EVITA charts the young and ambitious Eva Peron’s meteoric rise to sainthood. Set in Argentina between 1934-1952, the Tony® Award-Winning musical follows Eva Duarte on her journey from poor, illegitimate child to ambitious actress to, as wife of military leader-turned-president Juan Peron, the most powerful woman in Latin America, before her death from cancer at age 33. The events in Evita’s life are presented in song, while the story is led by the show’s narrator, Che.

Well-known numbers from Tim Rice and Andrew Lloyd Webber’s musical masterpiece include “Don’t Cry for Me Argentina,” “Oh What a Circus,” “Buenos Aires” and “Another Suitcase in Another Hall.”

“With what’s going on in the world of politics today, there’s no better time to re-visit this iconic work of musical theater,” praised director Ferrara. “We are excited to bring EVITA to theaters across the country.”

One of the most lauded works in musical theater history, EVITA has earned accolades and awards across the globe, including the Olivier Award, Drama Desk Award™ and Tony Award® for Best Musical. The 1980 Grammy Award for Best Cast Show Album went to Rice and Lloyd Webber for EVITA. Twenty-Five English language recordings of the cast album join foreign language versions in Spanish, German, Japanese, Hebrew, Czech, Korean and Icelandic among many others.

The popular film version of EVITA won the Academy Award and Golden Globe for the new song ‘You Must Love Me,’ which Madonna (role: Eva) sang in the film. “We are excited to include “You Must Love Me” in our touring production of EVITA,” shared musical director Lloyd Cooper. “Thanks to Rice and Lloyd Webber, the musical has grown even richer with the addition of this gorgeous ballad.’

“With the increasing use of video on Broadway and in touring productions, we felt it was time to bring this technology to our production of EVITA,” continued Ferrara. “With our video walls, we can take the audience cinematically from rural Junin to the Casa Rosada, cross the Atlantic on Eva’s Rainbow Tour, bring her back to her beloved descamisados, and do all of it seamlessly onstage.”

Starring as Eva is Miami-based actress Yael Reich, who has been featured in national tours of RENT and MAMMA MIA!, among other hits.  She is joined by Los Angeles actors Lance Galgon as Che and Gary Barton as Juan Peron. A talented cast of singer/dancers and orchestra of nine musicians round out the touring company, under the auspices of general manager/executive producer Paul Rambacher.

Ticket buyers are reminded that for Celebrity Attractions’ productions, buying online at CelebrityAttractions.com, by phone at 800.869.1451 and in person at the Abilene Convention Center Box Office are the only official retail ticket outlets and the only way to guarantee that you are paying face value for legitimate tickets.  Ticket buyers who purchase tickets from a ticket broker or any third party should also be aware that Celebrity Attractions is unable to reprint or replace lost or stolen tickets and is unable to contact patrons with information regarding time changes or other pertinent updates regarding the performance.

Get social with Celebrity Attractions by becoming a fan on Facebook.com/BWayAbilene.  Follow the Abilene engagement of EVITA by joining the conversation using #EVITALR.

Celebrity Attractions and the Abilene Cultural Affairs Council are proud to have Perry Hunter Hall Insurance as the welcoming sponsor for EVITA and KTAB/KRBC and TownePlace Suites by Marriott Abilene Northeast as sponsors for this spectacular season.  For more information, please visit www.CelebrityAttractions.com.