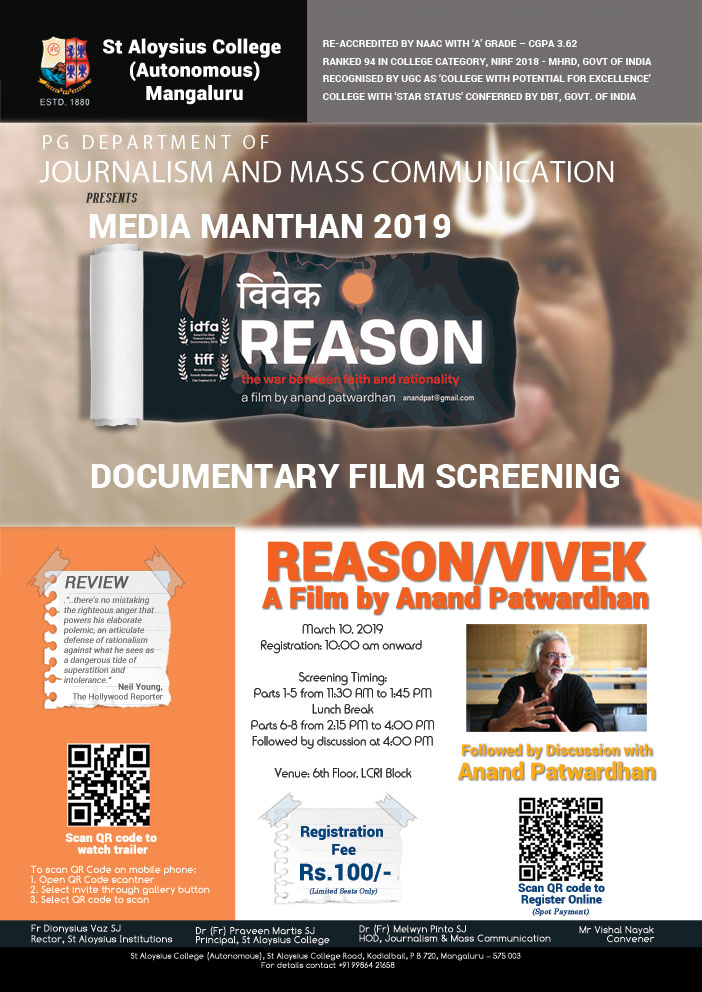 Mangaluru, Karnataka ( PR Submission Site ) March 1, 2019 – Renowned activist filmmaker Anand Patwardhan, known for his insightful, hard-hitting documentaries, will be in Mangaluru for a screening and discussion of his 2018 documentary ‘Reason/Vivek’ on March 10, 2019 at St Aloysius College, Mangaluru.

Ever since premiering at the Toronto International Film Festival, ‘Reason/Vivek’ has been receiving major attention for its analysis of the tumultuous changes enveloping the nation coinciding with the rise of ultra-nationalist and militant right-wing forces in India. Reason/Vivek also won Best Feature-Length Documentary at the 31st International Documentary Film Festival Amsterdam, in November 2018.

Like most of his previous films, Patwardhan is actively present in the film as the linking element and is, as usual, confrontational and questioning. ‘Reason/Vivek’ sees the filmmaker step out into the streets on his quest to probe the hardliner agenda.

The intention of the PG Dept of Journalism and Mass Communication, St Aloysius College is to raise awareness against violence and extremism. “At a time of rising fundamentalist violence against minorities and dalits, we feel this opportunity to view a film documenting these atrocities and discussing with the filmmaker is a need to raise awareness in youth,” says Dr Melwyn Pinto, HOD, Dept of Journalism and Mass Communication.