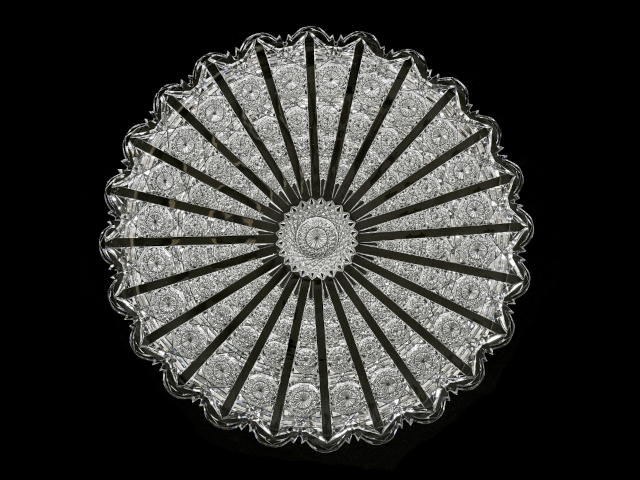 Douglass, KS, USA — Woody Auction specializes in Victorian and pre-1920s antiques, but the firm’s real stock in trade is fine cut glass, which it has been offering at auction for years. This point was driven home over the course of 2022. When the company held four major cut-glass auctions. They all performed well and contributed to a highly successful year overall.

The first was a two-day American Brilliant Cut Glass (“ABCG”) auction held on March 4th and 5th that featured a pair of outstanding single-owner collections. Like nearly all Woody Auction sales, this one was held online and live in the Woody Auction hall located at 130 East 3rd Street in Douglass. And, per usual, all lots were sold to the highest bidder, without reserves.

The collections were those of Ila and the late Joe Lemon, who gathered fine examples of colored stems and great patterns; and Rich and Sandy Encelewski, who insisted that all the pieces in their collection be in outstanding condition. Some smaller collections were also added, pushing the lot count total to more than 500.

Top lots included a signed Egginton pitcher in the Trellis pattern, 8 inches tall, a beautiful example that featured a triple-notched handle and hobstar base ($11,500); and an American Brilliant Cut Glass bowl of exceptional quality signed by Hawkes in the Imperial 2 pattern, 3 ½ inches by 8 inches with deep cutting, from the Lemon collection ($9,200).

“Fine cut glass auctions are always a thing of beauty, and when longtime collections come together and are combined, the splendor can be overwhelming,” said Jason Woody, a co-owner of Woody Auction and a third-generation auctioneer. “The Lemon and Encelewski collections ranked among the best. The fact that both were being offered in one sale was just remarkable.”

The second major fine cut glass sale of 2022 was held on May 28th and featured a wonderful assortment of American Brilliant Cut Glass pieces, boasting a wide array of patterns and makers, many showcasing sterling silver.

“The year continued to bring some important fine cut glass items to public auction, Mr. Woody said. “This one had 436 lots total and included the Bill Shulhof estate (Michigan), the Kathy and the late Leigh Emmerson collection (California), and three other private collections.

A standout piece from the May auction was the ABCG punch bowl by Dorflinger in the Sultana pattern from the Kathy and the late Leigh Emmerson collection ($5,000). The punch bowl, measuring 6 ¼ inches by 15 ¾ inches, had an incredible sterling silver rim embossed with roses and was marked, “Shreve & Company, San Francisco”, with a monogram on silver.

Fine cut glass auction number three was an American & Brilliant Period Cut Glass auction held on September 10th. It featured the Joe Panico collection out of Ohio, developed over many decades and packed with patterns that included Aztec, Byzantine, Crystal City, Ellsmere, Herringbone, Orloff, Nautilus, Aberdeen and many others.

“Rare forms, great cuttings and a great overall well-rounded collection had items that had not been seen by the general public in an exceptionally long time,” Mr. Woody said.

Tankards piqued the interest of bidders in the September auction. Some examples included the following:

1. An ABCG tankard signed Libbey in a rare, unidentified Anderson pattern, 11 ¾ inches tall, having a design of vesica, cane, nailhead diamond, hobstar, star and fan motif, a pattern cut handle and a hobstar base ($21,850).

2. An ABCG tankard signed Libbey in the Aztec pattern (one of the great patterns), 11 ¾ inches tall, with a pattern cut handle and hobstar base ($19,550).

3. An ABCG tankard in the Byzantine pattern by Meriden, 12 inches tall, featuring an elegant shape, fantastic blank, a pattern cut handle and hobstar base ($19,550).

4. An ABCG tankard signed Libbey in the Herringbone pattern, 13 ½ inches tall, with a pattern cut handle, ray cut base and superior blank ($11,500).

Woody Auction may have saved the best for last when it conducted a 400-lot antique glass auction on November 12th that featured Aztec goblets, Waldorf stems, an Isabella tankard and other fine pieces.

“This auction was developed over nearly twelve months of accepting collections from around the country and the world,” Mr. Woody said. “Some had just two or three items, while others had 70-80 items. Collections included the Putzka and Atzenhoffer collections out of Texas, the Ros King collection out of the United Kingdom, and private collections out of Ohio and Florida.”

The expected top lot was a round American Brilliant Cut Glass tray in the Hawkes Panel pattern, 16 inches in diameter and weighing over 11 ½ pounds. It did not disappoint. “This was the finest Hawkes Panel tray it had ever been my privilege to sell,” Mr. Woody said. It went for an astounding $115,500.

To learn more about Woody Auction and the firm’s schedule of upcoming auction events, please visit our website. Updates are posted frequently.

Capping the year was an auction held November 12th, in which a round American Brilliant Cut Glass tray in the Hawkes Panel pattern, 16 inches in diameter, over 11 ½ pounds, made $115,500.