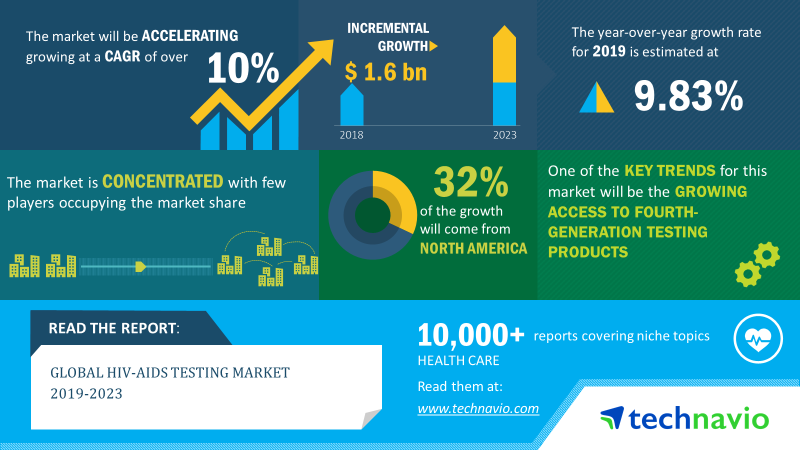 (prsubmissionsite) October 16, 2019 – The global HIV-AIDS testing market is poised to reach USD 1.6 billion by 2023, according to a new report by Technavio, progressing at a CAGR of more than 10% during the forecast period.

“Government and private organizations across the world are initiating campaigns at global and local levels to spread awareness about the spread of HIV infections. Such awareness programs have increased the adoption of routine HIV-AIDS testing among adults, adolescents, and pregnant women. In addition, certain guidelines and recommendations provided by the government agencies have considerably boosted the routine diagnosis of HIV”, says a senior analyst at Technavio.

The market is driven by the growing awareness for early detection of HIV infection. In addition, the increasing government support for HIV research and favorable recommendations on HIV testing is anticipated to boost the growth of the global HIV-AIDS testing market during the forecast period.

The surge in the number of campaigns at global and local levels to prevent the spread of HIV by government and private organizations have increased awareness among people. For instance, the United Nations Programme on HIV/AIDS (UNAIDS) aims to end HIV-AIDS as a public threat by 2030 by encouraging countries to achieve treatment targets through creating awareness about HIV status, treatments, and viral suppression. This is driving many countries to develop various awareness programs and initiatives to reduce the spread of HIV. For example, the Government of India is trying to achieve the HIV treatment target set by UNAIDS through its National AIDS Control Programme (NACP). This initiative significantly helped the country in reducing HIV infection rates. Many such national and international awareness programs across the world have enabled timely detection of HIV infections, leading to the expansion of the global HIV-AIDS testing market.

Many governments across the world are focusing on establishing efficient healthcare infrastructure for the timely detection and treatment of HIV infections. For instance, the European Commission, under the Horizon 2020 program encourages HIV research by providing monetary support. In addition, favorable recommendations by government authorities have increased the adoption of routine HIV-AIDS testing among adults, adolescents, and pregnant women. For instance, the CDC in the US recommends routine HIV screening for every individual between the age of 13 and 64 years. These factors are significantly contributing to the growth of the global HIV-AIDS testing market.

Get the Complete Report @ http://bit.ly/2ORVTY4

The report includes detailed profiles of the leading companies & prominent vendors of the market:

Some of the key topics covered in the report include:

The global HIV-AIDS testing market is poised to reach USD 1.6 billion by 2023, according to a new report by Technavio, progressing at a CAGR of more than 10% during the forecast period