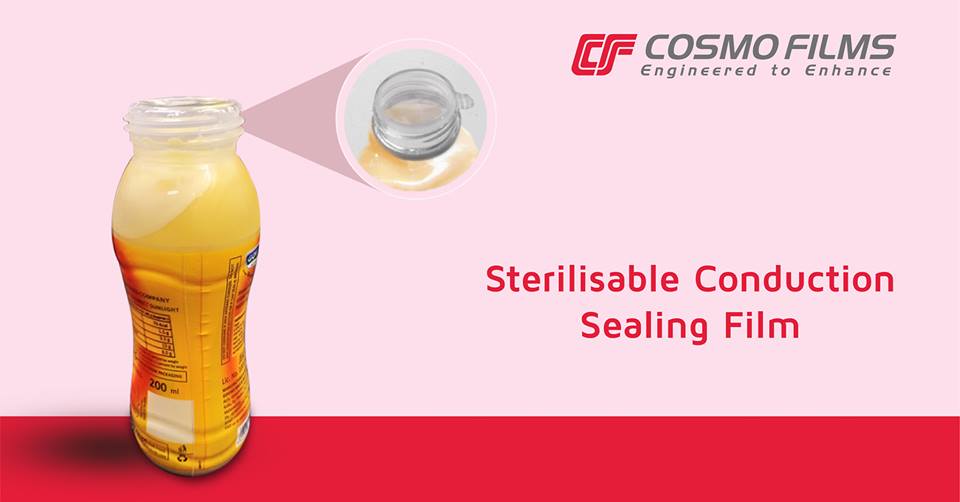 March 16, 2019 ( PR Submission Site )  Cosmo Films, a global leader in speciality films for flexible packaging, lamination and labeling applications as well as synthetic paper recently launched sterilisable conduction sealing film for wad and lidding applications for PP and PE containers. This film can withstand high temperatures during sterilization process, which is used to increase the shelf-life of the product.

The newly developed sealing film is a clear, one side corona treated and other side heat sealable film. The film offers exceptional seal integrity while it also offers improved convenience to the consumers because it is easy to open and peel cleanly without splitting. Apart from offering excellent optical properties and printability, this film is safe for direct food contact.

This film can be used as a mono layer or as a sealant layer in a laminated structure with other substrates like aluminium foil. It can be used in roll or pre-cut form (after lamination with other substrates) based on the requirements of the customers. The film is used primarily in dairy industry for flavoured milk; food & beverage segment for juices, energy drink, bakery products; pharmaceutical industry; agro chemicals and cosmetics industry.

Speaking on the development, Mr. Pankaj Poddar, CEO, Cosmo Films said, “This is an award winning film especially developed keeping in mind the dairy industry. The uniqueness of the film lies in its endurance to withstand high temperatures during sterilisation process without affecting its seal integrity. We are confident of the success of this film and the response so far has been extremely encouraging”

Established in 1981, Cosmo Films is a global leader in speciality films for packaging, lamination and labeling applications. With engineering of innovative products and sustainability solutions, Cosmo Films has been partnering with world’s leading F&B brands, packaging & printing converters to enhance their consumer experience.