SANTA MONICA, Calif., Feb. 5, 2018 /PRSubmissionSite/ — A rock star speeding backward in time, an action sequence from a new superhero movie and a high-speed dinosaur chase: automakers that aligned vehicles with spectacle, celebrity and pop culture during Super Bowl LII succeeded in attracting the most shopper attention on Edmunds, the leading car shopping and information platform. Edmunds analysts tracked traffic to brand and model pages on both its desktop and mobile sites during the game to see which automotive ads were most successful in driving immediate shopper interest. Percentage lifts are compared to average Sunday traffic levels on Edmunds.

The ad for the Lexus LS proved most successful on the model side, with traffic up 1,080 percent to its pages on Edmunds during the game. Traffic to the Kia Stinger rose 1,052 percent during the game, and traffic to the Jeep Wrangler was up 93 percent. Interest in these models drove these three automakers to victory on the brand side: Kia piqued the most curiosity, with traffic up 94 percent during the course of the game; Lexus was second at 43 percent; and Jeep was third with a 21 percent traffic lift.

“Blockbuster movie and celebrity tie-ins were a recipe for success in standing out from the competition and generating interest among car shoppers during the big game,” said Jessica Caldwell, executive director of industry analysis at Edmunds. “When the audience is tuning in for the biggest sporting spectacle of the year, it makes sense that the most action-packed and over-the-top advertisements would generate the most immediate results.”

Results were a bit more muted for the Ram brand, which aired two spots promoting the new 1500. While cumulative shopper interest during the entire game for both the Ram brand and the 1500 were nominal, both ads did generate significant spikes in interest immediately after the ads ran. In particular, the Ram ad that featured a speech from Martin Luther King Jr. generated a 91 percent lift in shopper interest in Ram and a 148 percent lift in model traffic for the 1500 during the second quarter of the game.

“Regardless of where consumers stand on the Ram commercial controversy, the automaker did succeed in grabbing the attention of car shoppers — albeit for a brief period of time,” said Caldwell. 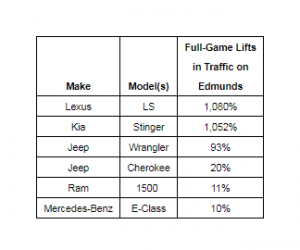 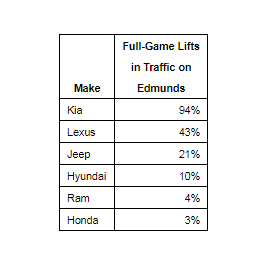 About Edmunds
Edmunds is the leading car information and shopping platform, helping millions of visitors each month find their perfect car. With products such as Edmunds Your Price, Your Lease and Used+, shoppers can buy smarter with instant, upfront prices for cars and trucks currently for sale at more than 13,000 dealer franchises across the U.S. Edmunds’ in-house team of unbiased car-shopping experts provide industry-leading vehicle reviews and shopping tips. The company also hosts a 20-year-old forums community that connects members to other car shoppers and enthusiasts. The company is regarded as one of America’s best workplaces by Fortune and Great Place to Work. Edmunds is based in Santa Monica, California, and has a satellite office in downtown Detroit, Michigan.