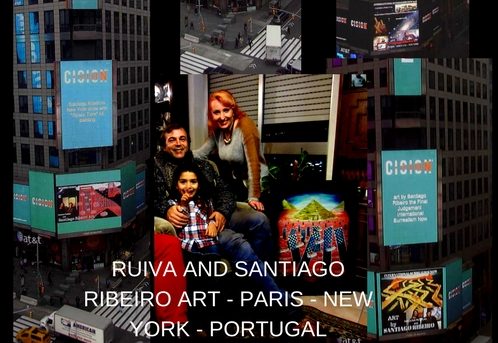 Santiago Ribeiro is preparing the International Surrealism Now exhibition to November 17, 2018, in Coimbra, Portugal with exhibitions in Spain, New York, Paris and Moscow.

Coimbra, Portugal, April 10, 2018  /PRSubmissionSite/– Ribeiro is starting organizing and promote the International Surrealism Now exhibition with more than 100 artists from 45 countries which is to open at the Coimbra House Culture and Edifício Chiado Museum in Portugal next November 17 of 2018. Billed as the largest world exhibition of contemporary Surrealism art in Europe the exhibit of paintings, drawings, digital art, photographs and sculpture is also expected to be shown, at least in part, at several monuments and public spaces throughout Portugal..


International Surrealism Now exhibition started in 2010 organized by Bissaya Barreto Foundation and Santiago Ribeiro. And after 8 years becomes The world’s largest surrealist art exhibition of the 21st century, with 107 surrealist artists from 45 countries and five continents will participate.

Note: The renowned British cultural magazine, The Culture Trip, named 10 Portuguese artists as the most internationally recognized at the present time and Santiago Ribeiro it is one of them.

Ribeiro’s work has been featured at the U.S. Embassy in Lisbon, in the Portuguese American Journal, in Digital Meets Culture, Pressenza fr, metroNews.ru, Pravda in Portuguese, The Herald News, ARTVOICE, Associated Press, EFE, APA ots, AAP, Reuters, ANA, News Aktuell  and many other publications can be seeing on the link.

Having also been featured in Paris at the “Osmosis-Kiraméki Transfigured!” event along with cultural icons and renowned artists at JPHT Gallery.

In Moscow at the international project “Visionary Art Award” that will be held in the historical center of Moscow, in one of the best exhibition venues in Moscow – in the “House of Artists of Moscow”. The dates of the exhibition: March 27 – April 1, 2018.

In New York the Portuguese surrealist painter Santiago Ribeiro has been featured since July 2017 at the Thomson Reuters and Nasdaq OMX Group at Times Square in New York City, and will remain highlighted throughout 2018.

“As usual, every time, I do something different and innovative and the idea of exhibiting in Times Square, New York, shows how media and new technologies are a modern way to divulge our art.” – he said. declared Ribeiro.

In Granada, Spain, Ribeiro make presence in the big international art exhibition in the Center of Churriana de la Vega in the city of Granada in south of Spain. The 9th edition of Fiarte Granada has more than 120 artists from 32 countries. FIARTE is a creation of the artist Yamal Din also the organizer where the municipality of FIARTE awarded the international cooperation award to the Portuguese artist Santiago Ribeiro.

Born in Coimbra, Portugal, Ribeiro attended art classes at Escola Avelar Brotero and the Escola Superior de l’Education in Coimbra. He has organized and participated in numerous individual and collective art exhibitions in Portugal and abroad.

Its sponsors include the Bissaya Barreto Foundation, Câmara de Coimbra and the North American MagicCraftsman studio.

International Surrealism Now Schedule: from 9h to 13h and from 14h to 19h.

Santiago Ribeiro is preparing the International Surrealism Now exhibition to November 17, 2018, in Coimbra, Portugal with exhibitions in Spain, New York, Paris and Moscow.