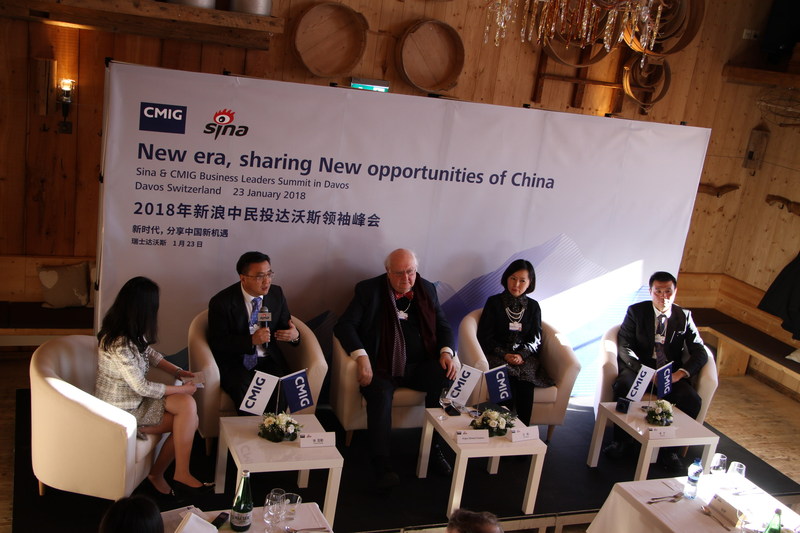 DAVOS, Switzerland, Jan. 25, 2018 /PRSubmissionSite/ — On Jan. 23rd, China Minsheng Investment Group (CMIG), together with Sina, a leading online media company, held the 2018 Business Leaders Summit in Davos, Switzerland. Sir Angus Stewart Deaton, the Senior advisor of CMIG and the Nobel Laureate in economics in 2015, delivered a keynote speech on the Chinese economy from the perspective of Happiness Economics.

Deaton pointed out that in the past 10 years, China’s economy has been growing at a high speed, and residents’ happiness has gradually increased. Meanwhile, the latest Gallup data shows that China’s leadership is preferred to America’s leadership by much of the world.

He also noted that China’s current elderly population is rapidly growing and the living and healthcare arrangements must be paid attention to.

Deaton said, “In China, economic growth has been very rapid, so that children are much better off than their parents and can afford to support their parents or grandparents financially, such as housing, accommodation and health care, even when they live independently.“

“This is an area where CMIG is doing good work, expanding the network of in-home care for the elderly, and providing the market opportunity for children to finance the happy and independent living of their parents and grandparents,”Deaton added.

Wang Hui, Chairman of CMIG Futurelife, gave her solution at the summit for Chinese commercial elderly care — communities. She said, “Communities, where most people spend the longest time and which relates most closely to people’s daily life, constitute a major platform for consumption upgrades. Meanwhile, consumption upgrades and commercial innovation in communities can most directly improve the well-being of their members.”

CMIG Futurelife, a crucial platform of CMIG in upgrading deployment of community-based consumption and in-home aged care, is the largest enterprise in China engaging in community management and services. So far, CMIG Futurelife has already established a nationwide three-tier urban aged care network, an online aged care services platform, and an industrial alliance.

Entrepreneurs and scholars including Zhang Yaqin, president of Baidu, Honson To, chairman of KPMG Asia Pacific region and China, etc. were present at the summit.

CMIG was founded by 59 leading private companies in 2014 with registered capital of 50 billion yuan.